Las Vegas is the city that never sleeps. Hundreds of casinos and hotel resorts and thousands of restaurants make this place a perfect spot for your vacation, bachelor party, wedding, or any other special occasion. Websites like https://vegasslots.net/ can help you pick the best hotel and casino and prepare yourself before the trip. However, Vegas is not only known for gambling and food. There is a reason why this place is called the Entertainment Capital of the World.

Some of the best musicians and performers have made their careers by entertaining visitors in Las Vegas. These are the events and shows the city is known for and you won’t be able to see them anywhere else. So, if you happen to be in Vegas while they are happening, you should definitely go see them.

Cirque du Soleil (Circus of the Sun) is one of the most popular circus shows in the world. It was founded by two French-Canadian street performers in the 1980s and moved to Las Vegas where it became one of the symbols of the city’s entertainment scene.

Cirque du Soleil organizes several events in Vegas every year and entertains around 5% of the city’s visitors. The shows usually last for about two hours and are divided into two parts. This is all but a typical circus show. The acrobatic performances are mixed with singing and dancing, and the whole show has a theatrical vibe to it.

Blue Man Group is a theatre group that combines performance art with music. The group normally consists of several speechless blue-faced bald men dressed in black. The music is almost never vocal and is created by the group playing different percussion instruments.

READ  I had so much fun creating my Christmas craft with #LauraKellyWinterHats ! Learn about the amazing products I used from @ellisonedu , @laurakellydesigns , #buttonsgalore and #ilovetocreate along with directions on how to make my banner and enter to #WIN a crafting package prize! ⛄️❤️ Visit http://ift.tt/KW1TtJ

While the Blue Man Group performs all over the globe, some of their most popular concerts are in Vegas. Since 2015, one of their theatrical productions includes events held at the Luxor Hotel and Casino in Las Vegas Boulevard.

Electric Daisy Carnival is held all over the globe, but its flagship location is Las Vegas, Nevada. The carnival lasts for three full days every year and features some of the best DJs from the world of electronic dance music. It’s a spectacle of both sound and light.

There’s a reason why this event is referred to as a carnival and not just a music festival. During the three-day event, you will be able to enjoy a lot of circus acts, art installations, and joyrides.

Even if you’re not a hardcore rodeo fan, the National Finals in Las Vegas is an event you must witness at least once in your life. Seeing the cowboys in action will make you appreciate their profession and convince you what great athletes they are.

There are several events that include bronc riding, tie-down roping, barrel racing, bull riding, steer wrestling, and more. The finals are held every first week of December at the campus of the University of Nevada.

Traditionally held in Caesars Palace, Absinthe is a mix of cabaret and circus that stars actors Voki Kalfayan and Anais Thomassian. Although the show is supposed to be a parody of Cirque du Soleil, the acts are very similar and equally impressive. The recurring roles include a sleazy salesman by the name of Gazillionaire, his lustful assistant Penny Pibbets, and the Green Fairy.

READ  What Is the Biggest Jackpot You Can Get in City Casinos?

The Absinthe crew is in Las Vegas almost every summer for a week-long tour.

How to Prepare Your House for the Upcoming Christmas Season 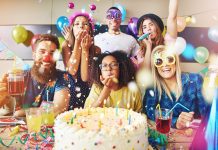 How to Travel Safely Amid the COVID-19 Pandemic?