Home Fashion Clothing A Complete Guide To Men’s Underwear: Everything You Need To Know

Underwear is a very personal matter. For the most part (unless you’re an underwear model), what we wear under our clothing stays a secret and is not something to be paraded around for all to see, but this doesn’t mean it’s not important.

Contrary to the assumption of the many men who will keep the same pair of boxers until their threadbare (and beyond), underwear matters. It matters because it changes the way feel in our clothes and improves our comfort level tenfold. Not to mention, a self-respecting man will always invest in quality underwear – it’s the best way.

To ensure you have the correct underwear etiquette, consult our complete guide on men’s underwear below. Chances are that you don’t know what you’re missing.

The evolution of underwear

In sartorial history, underwear is often (and unfairly) forgotten about, but we have come a long way from the days when we used loincloth to protect our modesty. Men’s underwear has evolved from being loose and impractical to small and snug, slowly but surely getting smaller and smaller as the centuries passed.

Back in the 13th-century men’s underwear resembled long billowing ¾-length trousers (loose-fitting and calf-length). They didn’t change drastically over the centuries that followed, except the hem slowly got shorter and the fit got tighter. There was, however, the invention of the revolutionary urinary flap to increase practicality and efficiency.

In the 1930s, the sex appeal of men’s underwear surged with the introduction of small briefs and boxer shorts – a far departure from what men had been wearing previously. Since then, underwear has become less about practicality and modesty and more of a fashion statement, with underwear designers like Calvin Klein monopolising the gap in the market with his sex-fuelled underwear campaigns featuring the world’s hottest celebrities.

READ  Looking for an online casino?

Today, men are more liberated with their underwear choices. There are multiple styles of men’s underwear on offer including briefs, boxer shorts, boxer briefs and trunks, all available in a plethora of styles and patterns.

The different styles of men’s underwear: how to choose the right style for you

What underwear style you choose is completely personal. It depends on taste, comfort levels and body shape. To find out how different underwear styles differ and which style is best for you, keep reading.

Briefs (also known as Y-fronts) are brief by name and by nature. This classic style is snug and covers the private areas neatly. They are particularly flattering on men with larger thighs.

Out of all the modern-day men’s underwear styles, the style that offers the most coverage is the boxer short. This style has more fabric, is longer and looser. This means that they are comfortable to wear, but also means they can bunch up under trousers. They tend to flatter all body types – larger and smaller.

The boxer brief is the hybrid between briefs and boxer shorts, and are arguably the most popular style of men’s underwear. The waistband sits on the waist and they are shorter than boxers but longer than briefs. They complement most body shapes and are both versatile and comfortable.

Trunks are the perfect underwear style to wear underneath slim-fitting trousers or tight clothing. They are comfortable and almost seamless, and although they complement lots of body shapes they look best on men with slimmer bodies because they are low-rise and are short in the leg.

Athletic underwear works the same way a women’s sports bra works – to support and protect. Athletic underwear is breathable and keeps everything tucked in and in place, making exercise easier and more enjoyable.

Once you find your perfect style of underwear, be sure to stock up. And if any pair gets a hole or a tear in it, replace them immediately!

Once you have chosen your favourite style of underwear (or multiple styles for different occasions), you must consider the fabric that’s right for you.

Cotton is the ultimate go-to fabric because it is breathable, lightweight soft and affordable. Jersey is a stretchier fabric, making it perfect for men who are active. Lyocell jersey, on the other hand, is slightly more luxurious due to its softness and ability to absorb moisture. Consider your day-to-day lifestyle and your typical clothing before you buy.

Underwear can be expensive – especially high-quality luxury underwear – but we think it’s an investment worth making. Don’t reserve your best pair of undies for times when you know they will be seen – treat yourself to what you deserve, every day. 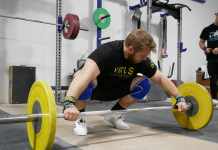 How to Use Weightlifting Wrist Straps

Why Purchase Your Swimwear Online?

Sarah Nova - January 15, 2021 0
Almost two hundred million people smoke cannabis worldwide, and that number is rising every day.Recreational THC use is getting legalized in more states in...