Sure, it’s shrunk since the draft ended back in the early 1970s, but there remains almost 1.3 million service personnel in the armed forces.

Clearly, that’s no small sum of people! Each and every single of them works to protect and serve their country. It’s an honorable profession, oriented around discipline, service, and sacrifice.

But you already knew that.

What you might not know about are the surprising military traditions that have formed over time! As it happens, there are many practices in the military that remain a mystery to the civilian world.

We wanted to shine a light on some of them! Interested in finding out more?

Keep reading to discover the military traditions you’ve probably never heard about before!

Let’s start with one of the more brutal traditions out there.

Imagine being in the air force and getting promoted to a new rank. It’s the proudest day of your life. You’re serving your country well and have been recognized for your efforts and abilities.

The wings (graduating a new school) or stripes (for a promotion) are placed on the chest. Then, suddenly, all your mates get around and take turns punching it in!

You literally bleed for the badge.

That makes it sounds bad. These days, getting your blood wings or stripes is a voluntary act.

READ  How Long Does Weed Stay in Your Urine?

Equally, it’s done far less frequently these days too. Something about the whole ‘making other people bleed’ thing brought bad press to the military. They cramped down on it as a result.

Challenges coins are an altogether less violent tradition in the military!

In actual fact, challenge coins are widely held and distributed (first responders get involved too). However, most civilians have never even heard of them.

The historical roots are up for debate.

Some trace them back to an American fighter pilot who was shot down over enemy territory in World War 1. After a series of events, he ended up having to prove his identity to a French commander who believed him to be German.

He showed the Frenchman a coin with his American unit insignia on it, which saved his life.

These days, challenge coins have developed into a hobby akin to collecting pins. There are all sorts of historic coins with cool backstories out there. Likewise, new ones are printed by people like the President to present to honored guests, and so on.

It’s common for military personnel to collect, swap and trade them.

You can learn the basics of challenge coins by following that link.

You read that correctly.

Yep, weddings are always a special day. And that’s particularly true at military weddings. Marrying someone in the military? Prepare for a light spank from one of their friends…with a sword.

The military is one big family. On the big day, a selection of military friends serves as groomsmen/bridesmaids. After the service, they’ll line up in full military regalia, and form an archway by holding their swords aloft.

The new bride and groom walk through the arch. Then, the last serviceman they pass will take their sword and tap the civilian spouse on the backside with their sword.

It’s their way of saying ‘welcome to the family’.

The military can be a superstitious lot.

In Vietnam, word got out that opening and eating apricots was bad luck. Every time someone did it, there’d be an enemy artillery attack.

It continued to happen and word got around. The apricot hex was unquestioned over time in Vietnam. They simply brought bad luck.

Since then, these hardened warriors have maintained their superstition. Avoiding apricots is now an amtrac tradition.

Again, you read that correctly.

That’s right, naval academy midshipmen are tasked with getting to the top of a 21 foot monument. Their goal? Remove a first-year hat that’s at the top, and put an upperclassman’s hat in its place.

Sounds straight forward enough. However, said monument is previously covered in a thick coating of lard by the upperclassmen before them. It keeps things interesting.

Oh, and it isn’t a ‘one at a time’ affair. Far from it. Everyone goes at once! This is a team effort and hundreds of midshipmen make the charge all at once. Something akin to a human pyramid is the favored approach to getting the job done.

Why do they do it? Well, it’s a rite of passage, representing the transition to the next year.

You’ve just come to the end of a long and esteemed career as a pilot in the Air Force.

READ  8 Awesome Jobs You Can Do from Home

It’s a sad day for all. But it’s also a time for reflection on the incredible times that came before, to thank the institution, pay respects to your fellow pilots, and…

Get soaked to the core with a good hose down.

That’s right. The final flight is a wet affair. Pilots celebrate their step back by being drenched in water. Of course, it isn’t restricted to water. You’ll get champagne, if you’re lucky, and probably a dose of whatever else is to hand as well.

Final Thoughts on These Military Traditions

There you have it: a selection of military traditions you’d probably never heard of before!

The US military is a time-honored institution. It’s full of incredible people who put their country first and opt to make the ultimate sacrifice if necessary.

It’s also full of insane traditions that have been forged in history and continued over time. To civilians and outsiders, they often make zero sense at all. Of course, that’s why they’re so fun to learn about.

Hopefully, this article has highlighted some of the more noteworthy ones. Keep them in mind next time you consider enlisting!

Want more articles like this one? Head to the lifestyle section now! 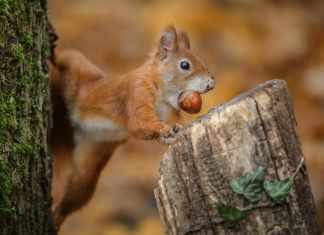 Insightful - February 25, 2021 0
Well, it's a very intriguing fact to understand what do squirrels eat. Most of these squirrels are vegetarian, which is why you will need to consider...