Whether we admit to it or not, we all have some kind of bucket. Maybe it's not official, and maybe we haven't written it down anywhere, but we all have a few things floating in the back of our mind that we want to do someday.

One of the things that seems to come up frequently on bucket lists is traveling. The world is a big place of seemingly limitless beauty, and we want to see as much of it as we can. Unfortunately, that's not possible, so we're forced to narrow it down.

There are a lot of bucket list destinations to choose from, but we'll talk about some of our favorites in the paragraphs below.

This incredible set of ruins in Peru was once a small city and is one of the last remains we have of the Incan empire.

Machu Picchu is gorgeous and looks like it was carved into mountains it was built on. While some of it was built into the mountain, the rest was created using a process where stone is carved to fit precisely together.

The biggest question is who built it. Thousands are estimated to have worked on it, yet the city wasn't built for more than a few hundred people. Did they use slaves? Were construction crews brought in from other areas?

READ  How To Travel While Paying Off Your Debt

If you're an American, this might seem weird. After all, isn't the point of adventure to get away from what's familiar? Shouldn't we be leaving the country, especially with a bucket list?

In most cases, yes, but you can't ignore something amazing just because it happened in your backyard.

The Grand Canyon is one of the most amazing natural phenomena in existence. It is a testament to the process of water carving away rock into a canyon that is nearly 300 miles long, 18 miles wide and a whole mile deep.

Rome is a must-see for anybody who's into history. This city contains everything from the Colosseum, to the Arch of Constantine. There are also several fantastic churches and basilicas, and even some of the oldest vulgar graffiti in existence.

Apparently, Romans were amused by some of the same immature topics as modern people.

Maybe you want to see more than just Rome. If that's the case, why not go on a European cruise this year? There are a lot of different journeys and so many things to see in Europe alone, to say nothing of the rest of the world.

There's no limit to the amount of bucket list destinations out there. Our world is a unique and complex one, you could probably live 100 lifetimes and still not see everything. It's this diversity that makes our world exciting and amazing.

We've mentioned only a few of our favorites above, but there are many more out there. Feel free to keep looking if you're eager to learn more.

If you want more travel, home, and lifestyle advice, please visit our site. 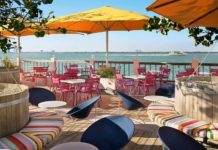 Fun Things to do in Miami With a Yacht Rental

apkbeasts.com is a participant in the Amazon Services LLC Associates Program, an affiliate advertising program designed to provide a means for sites to earn advertising fees by advertising and linking to Amazon.com.

Clicking on an Amazon link from apkbeasts.com does not increase the cost of any item you purchase.

Outdoor Party Ideas That Will Keep Your Family and Friends Entertained

Sarah Nova - April 7, 2020 0
In many areas of the country, it's still a little premature to do any serious entertaining outdoors -- but it's never too early to...

Outdoor Party Ideas That Will Keep Your Family and Friends Entertained