LED lights have greatly changed since they were first introduced and are becoming much more common by the day. There is a wide array of LED lights on the market now, ranging from compact lights that resemble the light bulbs they replace and novel shaped bulbs, to advanced technological wonders. And they’re moving from the overhead lamps to reading lamps, night lights, and even more niche applications. Here are three simple tips for choosing the right LED bulb.

A separate issue is the warmth or coolness of the bulb. This is rated in Kelvin, K for short. A “warm” bulb will have a rating of 2,700 to 3,000 Kelvin. This gives you the warm, somewhat diffuse light of older incandescent bulbs. An LED bulb of 3,000 K is equivalent in color to a halogen bulb. The label will probably identify this as a “yellow” light.

The 4,000 Kelvin color used to be the only “color” of light you could get an LED bulb in; this is called “cool white” or just white. These are the classic too-white bulbs that many didn’t want to replace the warmer bulbs they had used for a lifetime in their bedrooms.

A “cold” or “natural white” light will have a rating of around 5,000 Kelvin. This gives you the bright and often harsh light needed for workspaces or medical facilities. They’re also called “blue” lights. The 6,000K lights are called daylight; they put out a pure white suitable for strong spotlights.

READ  How Much on Average Does Air Conditioning Repair Cost?

Choosing the right led bulb requires understanding where and how the bulb will be used. For example, if you want to put an LED bulb in an enclosed fixture, you’ll need to buy an LED bulb designed for that application. Bulbs for enclosed fixtures are able to withstand higher temperatures and have a more efficient thermal design.

LED bulbs are popular for nightlights since they can last for years. However, nightlights in a bathroom or hallway are more likely to be bumped and hit. This makes flat LED lights built into a plugged-in panel a better choice over an LED bulb that looks like a glass bulb.

You can put an LED light bulb in many recessed lights. However, it may be easier to replace the entire recessed light fixture than try to find compatible LED bulbs. And you’ll always need to be careful of the type of light fixture since most LED bulbs won’t fit in the narrow fixtures in chandeliers and other hanging lights. Spiral bulbs simply may not fit under your lamp shade. If you like the globe-shaped light in that ceiling fixture, you’ll have to hunt to find an LED in the same shape. Or you need to replace the fixture; if not, put a cover over it to diffuse the light of a modern LED.

READ  Could Your Home Be A Passive Income Goldmine?

LED bulbs should never be used in an oven. LED appliance bulbs are an option for your refrigerator or freezer, though they’re often hard to find. You may not want to use them in your garage since LED bulbs may interfere with garage door remote controls. Check the garage door opener manufacturer website to see which LED bulbs are compatible.

Replace What You’ll Use the Most

Let’s be honest – the energy-saving benefits of an LED depends on how often you use the light. Replacing the light in your freezer is a waste of time and money because it is only on a few seconds at a time a few times a week. Compare this to reading lights that may be used for hours at a time, several times a week, or work lights in your office that may be on all day. So, if you’re considering replacing light bulbs to save money or save energy, first look for the light bulbs that are on all the time. These are typically the light bulbs continually used in the high traffic areas of your home. You can also set aside a cache of LED light bulbs that fit other fixtures in your home, so you can replace the light bulbs as they burn out.

Shop for LED bulbs based on their “lumens” not their watts, or you’ll end up with a bulb that fits in the fixture but not the expected brightness level. Select a bulb bright enough for your visual needs and the coloring that makes the light comfortable. Consider the application and don’t put LED lights where they don’t work well. Aim to replace the bulbs that are continually used in your home, though there are times you may need to replace an entire fixture in order to put in an LED bulb. 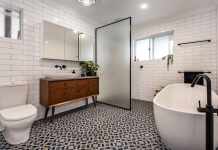 9 Essential Bathroom Accessories to Include in Your Bathroom Renovation