Home For the Home Cleaning Live in Oregon? Keep an Eye Out for These 9 Household Bugs

Did you know that almost half of the entire state of Oregon is a forested wonderland? That’s 30 million acres of greenery, comparable to 480 million tennis courts!

With such a massive forested area, it’s no wonder that Oregon boasts of a diverse ecology. It’s also due to this that the state is teeming with insects, with at least 521 different kinds calling it home.

As with other living creatures, many of these insects benefit the environment. However, many other bugs and critters that do more damage than good. Unfortunately, these are the pests that make their way into the Beaver State’s homes.

Whether you’re new to the state or a long-time Oregonian, it’s vital to know what these household bugs are. Many of them, after all, can trigger allergies, while others can transmit diseases.

We’ve compiled a list of the most common pesky bugs you’ll find in Oregon homes, so be sure to read on!

Experts estimate that at least 90 species of bed bugs exist, although only a few bite humans. Unfortunately, one of these biting species, the “Cimex lectularius,” is in Oregon.

Portland, being the largest and most populous city in Oregon, has the worst bed bug problem in the state. So much so that it’s part of the 50 US cities with the worst infestations.

Bed bugs don’t transmit diseases, but numerous bites may result in anemia. Bed bug bites may also come with allergens, which can then trigger asthma or allergies.

Heat treatment seems to be the best way to get rid of bed bugs, according to https://www.custombedbug.com/blog/5-effective-ways-to-get-rid-of-bed-bugs-fast-in-portland-oregon/.

One reason that heat works well against these bugs is that they do die in extreme heat. That goes for not only the adult bugs but also their eggs and larvae. Heat also works on bed bugs that have developed resistance to insecticides.

Brown marmorated stink bugs (BMSBs) have been a problem in Oregon since they arrived in 2004. It’s not only because they release an unpleasant smell when squashed or threatened. It’s also because they damage crops and destroy backyard gardens.

BMSBs have become an established pest throughout the Beaver State. Their top targets are farmlands, but they also invade homes during fall and winter.

Although most stink bugs are brown, BSMBs have lighter-colored bands on their antennae. They’re about three-quarters of an inch big and have hard shells that protect them. They fly, but they also like to hide by windows, especially draped ones.

You can use a vacuum cleaner to get rid of these bugs, but note that the machine will stink for quite some time. It there’s too many of them in or outside of your home, it’s best to call up a pest control expert.

From a technical perspective, mosquitoes aren’t “true bugs”; they’re insects. Still, this classification doesn’t make them any less pesky. In fact, they’re more than a nuisance; they can also be deadly.

What’s more, there are over 50 species of mosquitoes found in Oregon. Of these, the Culex and Aedes genera are the most common. They are also among the most dangerous, as they transmit and spread deadly diseases.

READ  Let The Light Shine In!

The West Nile Virus is one such mosquito-borne disease. The virus itself comes from birds. Mosquitoes then acquire the infection by sucking the blood of infected birds.

In 2019, Oregon had at least eight WNV cases in humans. The virus, however, can be as deadly to other animals, such as horses.

Aside from WNV, mosquitoes are also behind malaria, dengue, yellow fever, and Zika virus.

Mosquitoes are abundant in Oregon because of the state’s rich water resources. Stagnant waters, in particular, are a must for mosquitoes to breed in. Melting snow, when undisturbed, also give these insects even more places to breed.

Although you can’t fully get rid of mosquitoes, you can protect yourself from their bites. Insect repellants, for instance, are useful in driving them away. You should also use fly screens on all entry points at home, including windows, doors, and vents.

These are nuisance pests, breeding and thriving in – you guessed right – boxelder trees. However, they also feed on the seeds of maple trees and can even live in ash trees.

As nuisance pests, boxelder bugs rarely bite, only doing so to defend themselves. They also don’t cause significant plant damage, nor do they destroy property. However, the feces that they leave behind can cause stains on light-colored surfaces.

Western boxelder bugs do look scary, though, as they kind of resemble cockroaches. They can grow up to half an inch long, with a brown or black body marked by red veins. Their young offspring look even more imposing, with their bright red bodies.

If you always find these bugs inside your home, they may be getting in via gaps in windows and doors. Seal these entry points up with caulking and wrap-around door sweeps. Vacuuming can also help reduce their numbers indoors.

Carpet beetles don’t only live in carpets; they can also hide in closets, air vents, and baseboards. They got their name from the fact that they do feed on carpets rugs, as well as other fabrics and dry food goods. They can also survive on desiccated animal carcasses.

These household bugs don’t bite, but carpet beetle larvae can cause skin reactions. Some people who have allergies can develop a rash due when exposed to shed larvae bristles or skin. In others, the adverse effects can take the form of hives, runny nose, or itchy and watery eyes.

In Oregon, carpet beetle infestations occur year-round. These critters do love the light and warmth offered by homes, after all. However, they can also invade your home through clothes, pets, and even potted plants.

The best way to deal with carpet beetles is to prevent them from entering your home in the first place. As with boxelder bugs, you can keep them at bay by closing off gaps in windows and under doors. You should also brush your pets (and yourself) off if you’ve spent time outdoors.

Oregon is home to about 20 species of hard ticks, four of which bite humans. One of these four, the western black-legged tick, carries Lyme disease. The other three biters are the Rocky Mountain wood tick, the Pacific Coast tick, and the American dog tick.

Other than Lyme disease, tick bites are more of a nuisance, but they can also cause allergic reactions. As such, if you’ve been outside and you see a tiny reddish-brown, dark brown, or black spot on your skin, get it off right away. It’s likely a tick, and unless you remove it with a tweezer, it will keep sucking your blood.

Keep in mind that ticks also love to feed on cats and dogs. The biggest difference is, these bugs can be more dangerous to your pets. So, make sure that you also regularly inspect your furry family members for signs of ticks.

Speaking of cats and dogs, be aware that Oregon’s moderate climate can make them more prone to fleas. As with ticks, these tiny bugs can also cause skin irritation in both humans and animals. Moreover, infestations can give rise to excessive scratching in your furry family member.

From here, they can develop a type of bacterial skin infection known as “hot spots.” They can also lose patches of hair that can be even more susceptible to infections.

The good news is, flea infestations are preventable with the use of treatments. These include anti-flea collars as well as fluralaner and fipronil treatments. Be sure to give your pets regular baths too, as this can help kill and wash away both young and adult fleas.

Chiggers are much smaller than fleas or ticks, measuring only about 1/150 to 1/120 inches. That makes them almost impossible to see, but their bites pack a punch.

Also, unlike fleas or ticks, chiggers don’t suck blood; instead, they feed on skin cells. Because of this, their bites can cause swelling, which can then become prone to infections.

Chiggers are prevalent in Oregon because these bugs love hiding in forest vegetation. They can also latch onto your skin if you walk through tall grasses or meadows.

Insect repellent, as well as long-sleeved shirts and pants, can help you keep their bites at bay.

Tuxedo bugs have been a nuisance pest in Oregon since their discovery in 2002. They often invade homes during summer and fall. They don’t bite, but they do smell quite bad when they get squashed.

These bugs got their name from their impressive body markings that look like a tuxedo suit. Their bodies are almost all dark gray or black, with white stripes and spots. They’re slender and are about a quarter of an inch long.

As with most other household bugs, sealing entry points is the best way to keep these bugs away.

Don’t Let These Bugs Bite (Or Stink up Your Home)

There are hundreds of other bugs found in Oregon, but these nine are among the most common. Also, be on the lookout for other insect species, like cockroaches, ants, and termites.

Most importantly, always remember that pest prevention is better than elimination. Although it’s possible to eradicate these pests at home, it’s easier to keep them out.

Looking for more home and lifestyle guides like this? Then be sure to check out as many of the other posts we have here at Tasteful Space!

Pros And Cons To Artificial Grass

Apartment Cleaning Tips When Moving Out 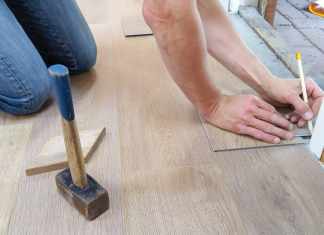 TastefulSpace.com - January 24, 2021 0
Believe it or not, the market for home repair and maintenance is expected to hit a whopping $326 billion by the middle of this...