When people used to discuss chainsaws it used to be they were only talking about petrol models but more lately the electric chainsaw has started to emerge as a popular choice by many looking to trim their own garden trees and bushes.

After looking for a chainsaw for my own use in the garden I stumbled across toolinspector.com/best-electric-chainsaw which has a very good article on electric chainsaw reviews and a users guide, I was surprised by the large improvements made in the last few years and thought it would make an interesting article for us to cover.

Let me know your thoughts in the comments.

The petrol version is still the king when it comes to outright power and will still be the professional arborist or tree surgeons’ choice because they are likely to be dealing with massive trees and branches.

But for many who want to trim their own medium or small tree branches, the electric chainsaws have many advantages over the petrol counterpart meaning the petrol chainsaw is going to be overkill for many potential users, a bit like cracking a nut with a sledgehammer.

The advantages of the electric chainsaw

The electric chainsaw has made leaps and bounds in progress over the last 5 years with the development of lithium Ion batteries, theses batteries have helped to increase the output power and battery life massively and the quick charge design has helped the electric chainsaw go from strength to strength.

1, Cheaper to run and easier to use

Unlike the petrol chainsaw, the electric model doesn’t have to fill with fuel to operate it which will save you money on running the power tool because electric is a cheaper power source than petrol.

It also makes the operating of the chainsaw a quicker and less hassle task where you can just plug in the battery check the oil level and go and trim those overgrown branches.

READ  3 Top Gifts for the Handyman in Your Life

The petrol chainsaw relies on some components for it to run smoothly, the fuel filter and air filter are paramount for the correct running of the petrol version, if these are not nice and clean then you will have big problems getting your chainsaw to work correctly with it cutting out and stalling very often.

With petrol chainsaws you have to put some oil in with the fuel to prevent the engine seizing up, this is another task to be considered before you can start your trimming work.

The spark plug on the engine of petrol saw needs to be replaced at a time period set by the manufacturer which is another task that the electric chainsaw doesn’t have to worry about with the electric one running on an electric motor so no need for a spark to ignite any fuel as it doesn’t have any of those components.

Petrol chainsaws can be a pain to start sometimes and that can be very frustrating if you have a lot of work to get through or a busy schedule. The electric chainsaw doesn’t suffer from this problem with it being a very simple set it up turn it on and go and trim those pesky over hangers.

you could just as well buy a cheaper electric model with a lower purchase and running cost and complete the work quicker and easier.

For around $100 you can get a powerful electric chainsaw that will cut all your branches to size with none of the mess about of the petrol version.

4, Better for the environment and your own health

With non of the burning of fuel or oil, the electric saw is much better for the environment and is a good way to reduce your carbon footprint, it is also much better for your health to not have to breathe the fumes the petrol engine emits whilst running.

READ  Travel Toiletry Bag: What you need to have in it

If you are wanting a chainsaw that is really portable and can reach into small and awkward space then the electric versions have more of a choice when it comes to small powerful saws. There are so many sizes from mini chainsaws right up to 16-inch beasts.

The small 10 inch ones are great for light tree trimming and very easy to operate and handle.

This is a big advantage for first time users or beginners and has increased the number of people who now do there own garden trimming work.

Don’t be fooled into thinking the electric chainsaw is not a powerful cutting tool because there are models that can hold there own against some of the petrol versions, these are of course in the higher price bracket but manufacturers such as Dewalt, Makita, Black and Decker, Ryobi and Greenworks have produced some high-end electric chainsaws that will tackle really tough and large wood branches.

So you can still get most of the power of the fuel version but with half the hassle of maintaining and running the fuel engine.

The electric motors are also getting better at converting the electric to motor power without losing as much energy from heat as they used to and the components are also improving.

Always follow the correct safety procedures when operating chainsaws whether it is petrol or electric both can do serious damage if you have an accident.

You should be confident before operating the chainsaw.

What kind of sword is best for you? 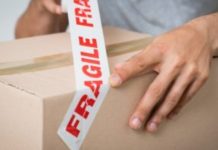 How to Pack Fragile Items When Moving

Why Are My Electrical Outlets Buzzing?

5 Simple Ways to Save Money on the Necessities

TastefulSpace.com - September 26, 2020 0
For many, the term "budgeting" can seem overwhelming and impossible. But the key to save money is to make smaller lifestyle changes on your...

5 Simple Ways to Save Money on the Necessities