Home Fashion Clothing Your dream dress: The ingredients which make up your wedding dress

The wedding dress. It’s the thing in which dreams are made of – and that’s a long time before you even meet the so-called ‘one’. It’s something that you have probably dreamed of since being a little girl, so it steals a lot of attention during the wedding planning period.

Some might suggest that it has stolen slightly more attention than it really should have. After all, the sheer amount of choice when it comes to dress shopping is overwhelming to say the least – and it can make it really difficult to make a decision.

Granted, things aren’t going to be simplified through one blog post, but by the end of today’s piece we’re hopeful that you will have refined the process somewhat and come a little closer to your final wedding dress decision.

Start your search early – but budget for alterations

Most experts agree that nine months is a good starting point for a wedding dress. If you shop any later than this, you are just increasing the risk of things going wrong. Particularly if you are not going to buy your dress “off the shelf”, so to speak, it can take up to six months for some bridal stores to order your dress and ultimately receive it.

Let’s also not forget the alteration-factor. You may have spotted the dress of your dreams, but on most occasions you will need at least some alterations made to it. Again, from a time perspective at least, this is something that needs to be taken into account.

Don’t bring every man and his dog along with you

Sure, it’s an exciting day, but that doesn’t mean to say that your whole family needs to be coming along with you. Like it or not, if you have too many opinions, it’s going to make it almightily difficult to make a decision.

Of course, this is something of a political debate as well as after all, you don’t want to upset anyone by not bringing them along. Still, we would recommend that you never surpass having three people by your side although ideally, this number would be lower.

Shortlist your styles – and limit how many you try on

As we all know, if we have too much choice our brains just can’t cope. This is why you need to do a bit of homework before you even step foot in the bridal shop.

Firstly, put together a shortlist. Look on the internet, in magazines and any other resource you can find to see the designers and styles that interest you. If you can visit the bridal shop with this mindset, you’ll have a firm idea and you’re not going to be overwhelmed with too much choice.

Then, limit the number of dresses you try on. Again, less is more and if some experts are to be believed, you should be looking at no more than seven dresses.

Don’t buy something you “will fit into” later

Finally, here’s one of the worst things you can do. You need to buy for the present – and not cling to the hope that you are going to lose weight for the big day. Sure, it’s going to be great if it happens, but it’s a big ‘if’ and can wreak havoc with your wedding day planning.

Just remember, it’s far easier to adjust something to a smaller size, rather than go the opposite way because you haven’t shed the ambitious pounds that you initially targeted. 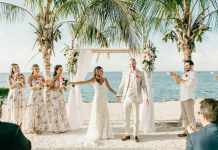 How to Use Weightlifting Wrist Straps

Why Purchase Your Swimwear Online?

Why You Should Take Your Motorhome for Regular Servicing

mindmingles - October 19, 2020 0
because it can help you save money. Since problems can often go undetected until they are really bad you will have to pay a...

Why You Should Take Your Motorhome for Regular Servicing