Australia is one of the best places in the world to experience a hotbed of different cultural foods. Chinese, Indian and pizza are some of the most popular options but there are others appearing, such as Lebanese cuisine.

Your first response might be to question what exactly classes as Lebanese food. This is understandable if you’ve never had it before or seen it.

The emphasis is on using local produce, this means that Lebanese dishes will change according to what time of year it is. This will certainly help with keeping them interesting all year round! You’ll also find that it uses whole grains, fruits, fresh fish and even poultry, as well as plenty of garlic, olive oil and lemon juice. Chickpeas are also included. Even though Lebanese food is often the mix of dozens of ingredients, the invention of the instant pot has made it much easier to create delicious meals from scratch.

The burning question when looking at food from other cultures is whether it is actually healthy for you or not. There are certainly several ways in which Lebanese food can be considered healthy:

By using fresh ingredients you will receive the most nutrients possible; they won’t have been destroyed in transit or through the freezing process. You’ll also find that the flavor is better.

As an added bonus the environmental impact is minimal because there are no transport issues.

Lebanese food uses olive oil, avoiding the fat of traditional cooking products such as butter and cream. In fact olive oil has been shown to help reduce cholesterol and even control blood sugar level. Even the fat in olive oil is considered healthy!

Sauces, which can often be heavy and fatty are absent from Lebanese cooking as the flavor is delivered by a carefully selected range of spices. This minimizes fat while maximizing flavor.

Because of the food available in Lebanon most meats are associated with rice and lentils, not starch filled potatoes which are likely to add to your waist line through additional carbs.

Lamb is the most popular meat for Lebanese cooking. In general local, grass fed is chosen which means it is high in proteins, zinc, fatty acids and vitamin B12. Lots of important nutrients.

One herb that is often used in Lebanese cooking is za’atar which has been used for centuries and is believed to help prevent cancer, boost your brain power and a range of other health benefits.

These little delights are known to be good at strengthening bones, lowering blood pressure and fighting cancer. They are also effective at reducing inflammation and lowering cholesterol.

This super food is an ingredient in most Lebanese dishes!

Providing you choose a local restaurant which abides with the traditional values for Lebanese cooking then you will be getting a very healthy meal. However, if you are purchasing this from a supermarket then you will need to read the label first.

Even if it is sold as authentic Lebanese food it might have additives and preservatives which will decrease the health benefits; it is worth checking. 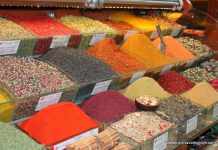 6 Ways to Spice Up Your Food ‘n’ Bev Uniform

mindmingles - May 8, 2021 0
So that the stress of moving to a new place does not kill all the joy of living, you need to properly organize the...