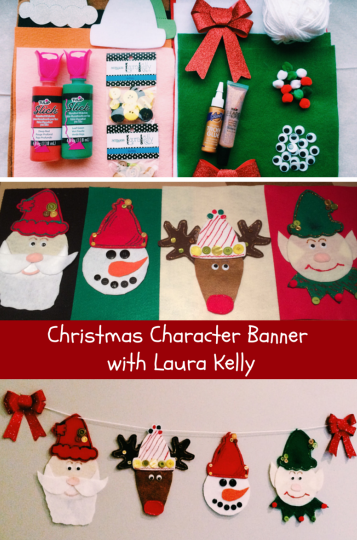 The most wonderful time of the year has officially begun! Snow is falling, winter boots are being worn, and the busiest holiday is quickly upon us! It is difficult to get into "Christmas mode," but when I received ten inches of snow, it was easy for me to catch the Christmas Spirit. So with the countdown officially on, it was time to make my first craft of the season!

I am honored to be working with Laura Kelly for this project. Laura Kelly is one of my craft idols. I had the pleasure of meeting her at the Bloggy Moms Conference and left with feelings of inspiration.

Enter below to win a craft package featuring the products I used in this post:

I was given her Winter 2015 Ellison Release Die-Cuts Hats and challenged to make whatever my heart desired! I came up with a, "Christmas Character Banner." I chose my four favorite symbols of Christmas: Rudolph, an elf, Santa Claus, and a snowman. All of these characters made me feel so warm and happy inside as a child, and they still do! I used the hats as part of a bigger project and turned them into faces. I connected my four faces and made a banner that can be hung over the mantel this holiday season.   This was an extremely fun and easy project and I enjoyed the ease I experienced while using these products. I loved the Kunin Group Felt as it was easy to cut and apply. The Alleene's Brand tacky glue worked like magic, and even kept the buttons in place! The Tulip Slick Fabric Paint was smooth and the cap kept paint from getting all over the place. This was a mess-free project.   It was fun to use unique objects, such as the Laura Kelly Buttons for Buttons Galore, and I was able to make this uniquely my own. This is perfect for the whole family to be involved in, especially the kids. Let their imagination and personality take over while creating this project and you will undoubtedly be left with great results.   I am so excited to display this with my other Christmas decorations, as this is now my favorite one!  (note: the Winter Hat Di-Cuts from Ellison Education and Sizzix will be available in January 2015)

I stenciled out the hat for Santa Claus.

I cut the hat out of felt.

I made 4 total hats in white, green, and red.

I repeated the stenciling and cut-outs for the rest of the Christmas hats.

I used the top of a plastic container to stencil the round shapes for the faces.

I made three circles, one in white for the Snowman, and two in flesh for Santa and the Elf.

I drew the reindeer head shape, antlers and cut them.

I cut out the round-shaped face for the elf.

I used Aleene's Tacky glue on the elf ears to the face, as well as the eyes and nose.

I created the mouth for the elf with Tulip Fabric Paint in Deep Red.

I used Aleene's Tacky Glue to attach the buttons to the elf hat.

I lined the elf's collar with the Tulip Beads in a bottle glitter.

Next up was my Snowman and I wanted to use Laura Kelly Buttons for Buttons Galore in Bumble Bee to decorate his hat.

I used Aleene's Tacky Glue to attach the button eyes to the snowman's face.

Here is the layout of the reindeer hat, face, nose, and antlers.

Close-up of the reindeer's button-lined hat.

The layout of the Santa Claus face.

Close-up of the Santa Claus hat!

Another close-up of the Santa Claus face, hat, and buttons!

Here is a line-up of all the completed Christmas character faces!

Next, I punched the holes with a hole-puncher for stringing the characters...

I attached each hat through the hole and tied my two red bows to the end of each string.

A perfect Christmas decoration to hang over the mantle!

2. Trace circles for the faces on the white and flesh felt using your choice of size lid cover.

3. Trace other patterns, such as:

4. Cut out all of the traced patterns.

5. Next, use the Aleene's Tacky Glue and apply the felt cut-outs to the faces, creating each character's profile.

8. Once dry, cut a hole in the top of each hat and apply a string, yarn, or ribbon, creating a banner.

9. Attach bows on the end of the string, and hang from a mantel or wall!

Why is Holiday with Friends More Fun?

5 reasons holidaymakers return to the Niagara Falls again and again

8 Hotel Safety Tips: Are Your Things Safe From Sticky Fingers?

apkbeasts.com is a participant in the Amazon Services LLC Associates Program, an affiliate advertising program designed to provide a means for sites to earn advertising fees by advertising and linking to Amazon.com.

Clicking on an Amazon link from apkbeasts.com does not increase the cost of any item you purchase.

5 Adult Things to Do in Las Vegas

5 Adult Things to Do in Las Vegas